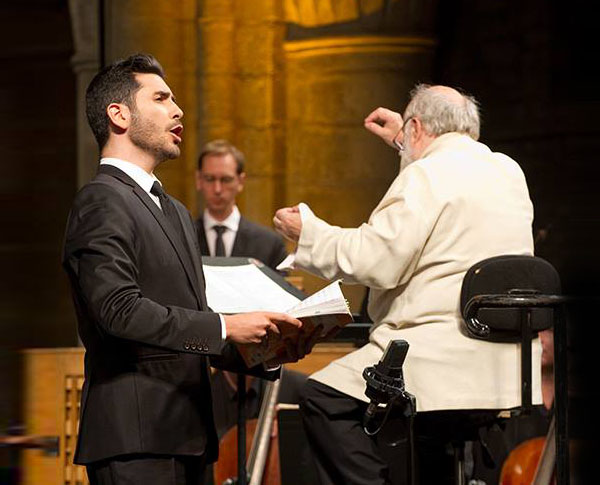 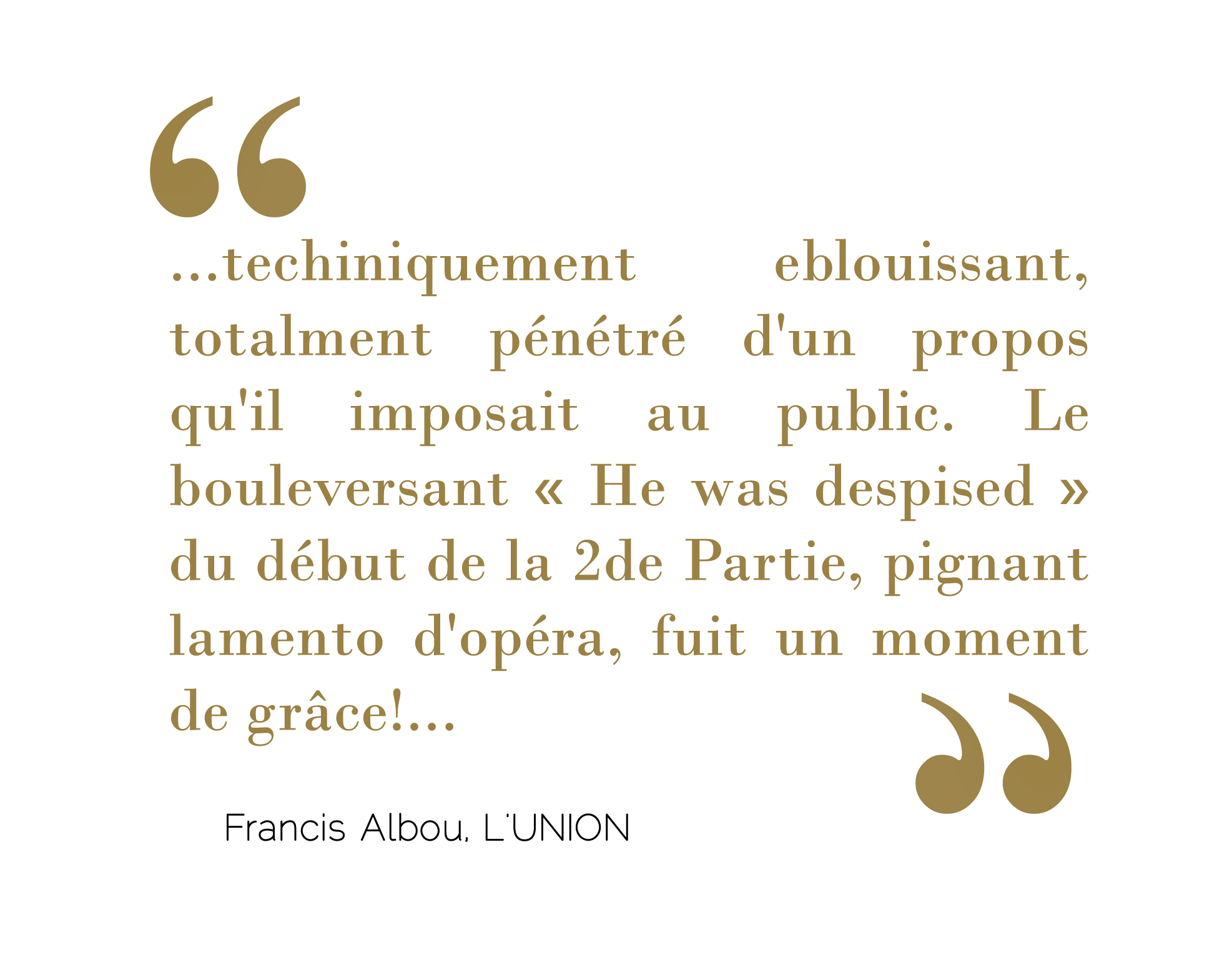 After winning the Voix Sacrée - Talents Lyriques de Reims prize in 2015, the Spanish countertenor Víctor Jiménez Díaz breaks into the international scene with the legendary French conductor Jean-Claude Malgoire, with whom he made his international debut at same year in the Festival of Flâneries Musicales, in Handel's Messiah. The local critic Francis Albou, described his debut as "technically stunning, totally submerged in his purpose, imposed himself to the public. His «He was despised» was a moment of grace!".

The same year, he would be highlighted among the Spanish Countertenors by the specialized magazine Ópera Actual and after winning the "Hariclea Darclée" International Competition in Romania, he returned to Reims to interpret the cantatas Longe mala RV 640 and Gloria 589 from Vivaldi, in addition to Stabat Mater de Pergolesi, under direction of Jean-Marie Puissant in the Auditorium of the Conservatory. Upon returning to his country, he offers various recitals and his first approach to the songs by John Dowland with the German laudist Maike Burgdorf (a repertoire he has repeatedly returned to with the same musician). Before the end of the year, he is hired again by the Festival de les Flâneries Musicales, to participate in the concert Reims chante avec ses choeurs, on the UNESCO celebrations. 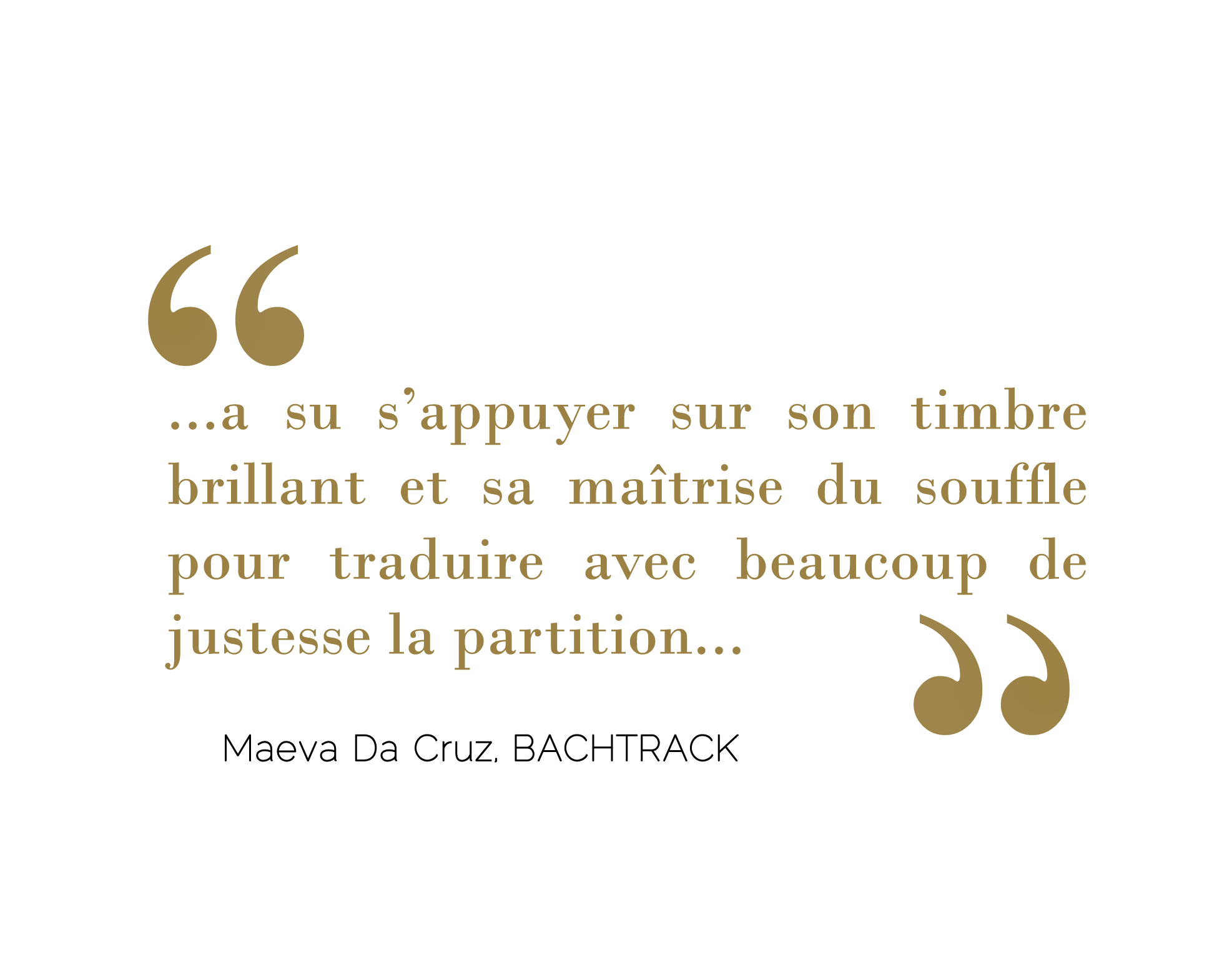 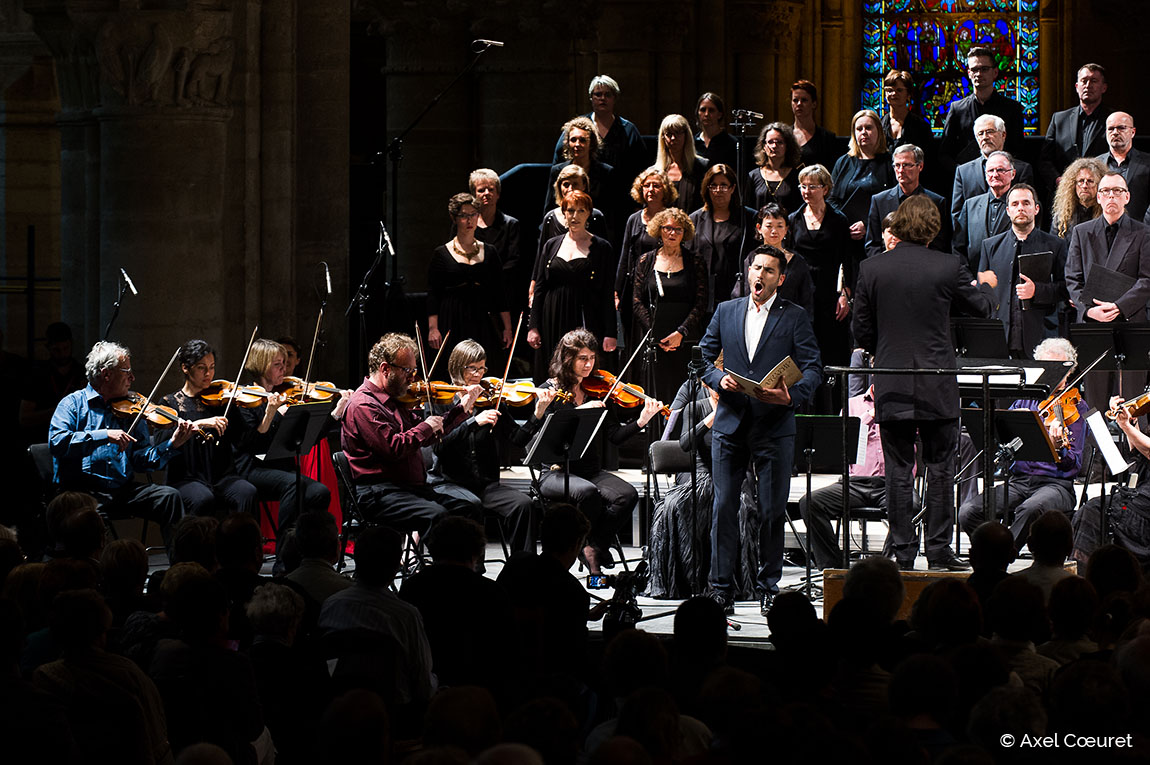 His growing reputation as a baroque specialist, brought him his debut in the international operatic scene, with the Handel's Arminio production for the Krakow Opera Rare Festival, under the direction of George Petrou and Max Emanuel Cencic. Bartosz Pacuła wrote in his review "my heart (and judging by the exuberant reactions of the public not only mine) was stolen by Víctor Jiménez Díaz who used his time to the fullest, electrifying all the spectators with his phenomenal resources. I must admit that I have not heard a male voice like this live, for a long time. "

A month later, he made his debut in Vivaldi's Orlando Furioso at the Atelier Lyrique de Tourcoing, extending the functions until April, which the production was presented at the Théâtre des Champs-Élysées. From the Paris debut it was written "a very pure voice, well defined in the acute, with bronze bass that surprised by its depth. He proposed complex ornamentation that he executed with agility and neatness" (Damien Deutilleul) or "sustained on his luminous sound and his mastering on the use of air, translated the score with great precision" (Maeva Da Cruz).

Before returning home and due to the indisposition of a colleague, he receives the call from Diego Fasolis to record and live premiere with only one week, and for the European Broadcasting Union (UER), the Galuppi's oratorio Adamo ed Eva in the Auditorium of the Radiotelevisione svizzera RSI and next to a stellar cast and I Barocchisti. Once back, he travels to Menorca to debut at the historic Teatre Principal Maonès with a tribute to the painter Calbó, with music by Vivaldi, Mozart and Gluck. In addition to offering several recitals in places such as the European Museum of Modern Art, the Teatre de Sarrià, the Reial Cercle Artístic de Barcelona or the Acadèmia de les Belles Arts de Sant Jordi. 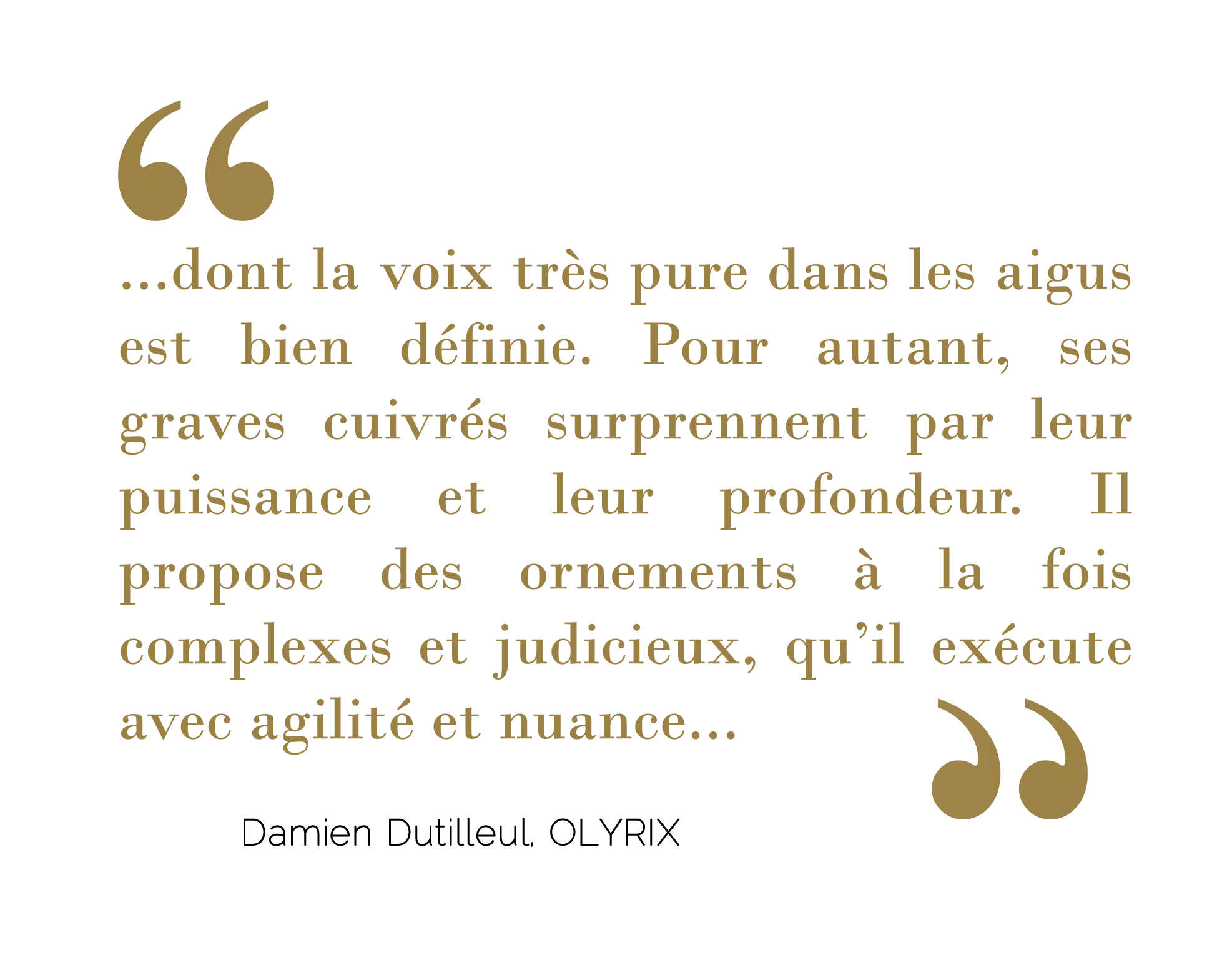 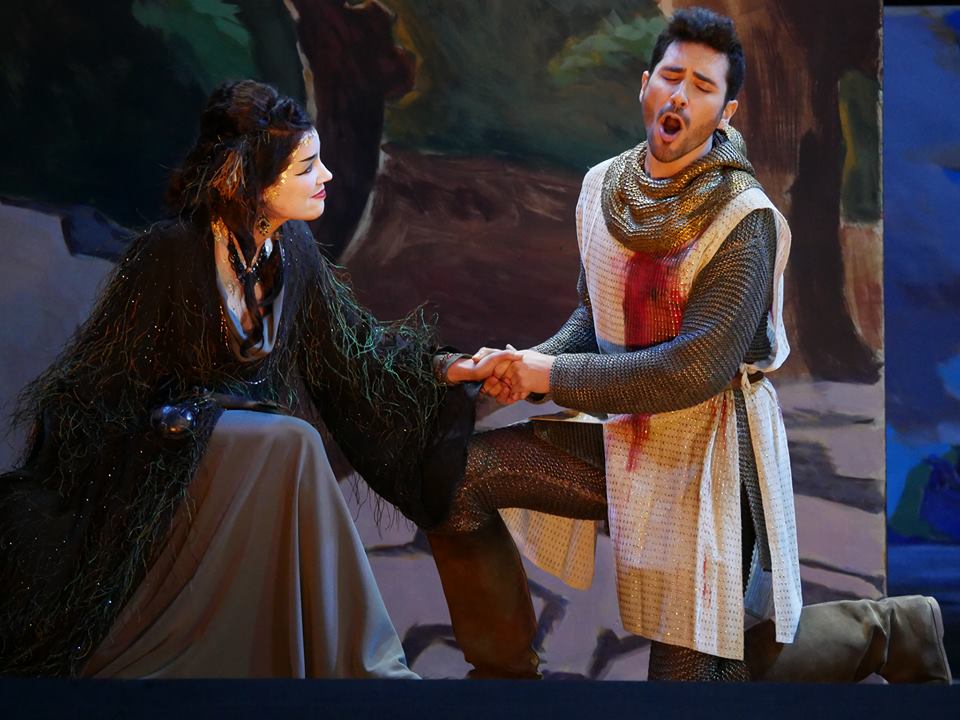 In October he was hired to sing at the reopening of the emblematic Gran Hotel Miramar and at the beginning of 2018, he receives a calling from the TEDx organization in his Malaga's delegation, to sing at his annual congress at the FYCMA Auditorium presenting him as an "artist that the world should know" through its media platforms. The rest of the year inaugurates the Palau de Congressos in Palma de Mallorca with Orff's Carmina Burana under the direction of Felipe Aguirre, debuts at the Real Teatro de las Cortes de San Fernando with Vivaldi's Salve Regina and Stabat Mater directed by Alberto Domínguez Gálvez, premieres in Barcelona A Thousand Ways with Il Gesto Armonico and music by Henry Purcell, premieres at the Auditorium of Vilafranca del Penedès Resplandece el sol de mediodía that composer Gil Dori wrote for him, premieres the Spanish baroque program No hay quien entienda el amor with music by Marín, Galán and De Hidalgo with the Rigaudon Ensemble on behalf of the #Cererols400 Festival and sings again the Pergolesi's Stabat Mater at Premià de Mar, under the direction of Josep Miquel Mindan .

In November he travels again, first to Reims where he debuted at the Basilique Saint-Remi the Vivaldi's Nisi Dominus next to the Česká filharmonie directed by Jean-Marie Puissant and then to Brazil, for his first Latin-American concert with Os Hérois de Händel together A trupe Barroca directed by Sérgio Dias, in the Metropolitan Cathedral of Vitória. Before returning from Brazil, he offered Masterclasses to young talents from the Espiritu Santo region and already in Barcelona, he presents himself with Handel's Messiah directed by Edmon Colomer in the Pau Casals stage of the Auditorium of Barcelona, with a "sold out".

The first months of 2019 and continuing with the training received at the Conservatori Superior de Música del Liceu, where he completed his academic training after being discovered at age 11 by the mezzo-soprano Helena Escolano, offers his first Dichterliebe op. 48 by Schumann and op. 3 and 121 by Brahms with the pianist Dídac Barber and presented himself at the Huesca Congress Palace and the Zaragoza Auditorium with Vivaldi's Gloria and Magnificat conducted by Ricardo Casero at the head of the Orquesta Reino de Aragón (with whom he debuted in Italy, with a program of Handel's arias at the Musica Riva Festival, after winning the Riccardo Zandonai Competition in 2014). Parallel to these productions, he responds to the calling of the Gran Teatre del Liceu to cover Bejun Mehta as Bertarido from Handel's Rodelinda directed by Josep Pons and Marcelo Buscaino (head of the reposition of Claus Guth's production).

On March 15th, Bocatto di Cardinale (Columna Musica), his recording debut with a program of Italian cantatas (some of them worldwide premiered) tribute to the Roman patron Pietro Ottoboni, was released. Receiving a warm welcome from the critics with enthusiastic descriptions of his voice, school and technical mastery. Not surprisingly, this album was nominated for the MIN Awards, for independent music, as "Best Classical Album". 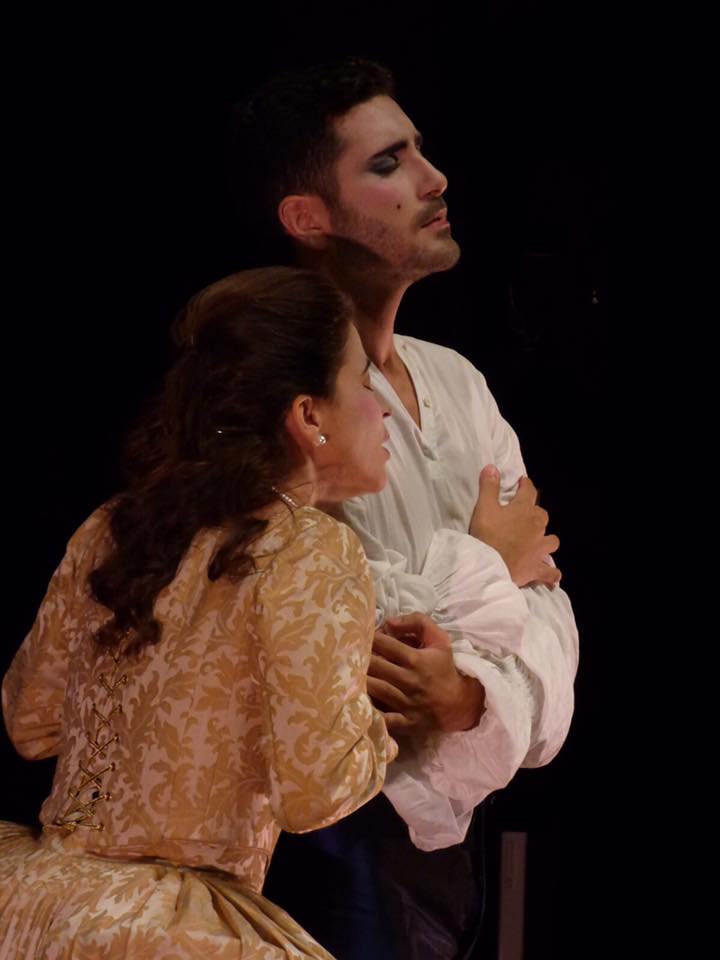 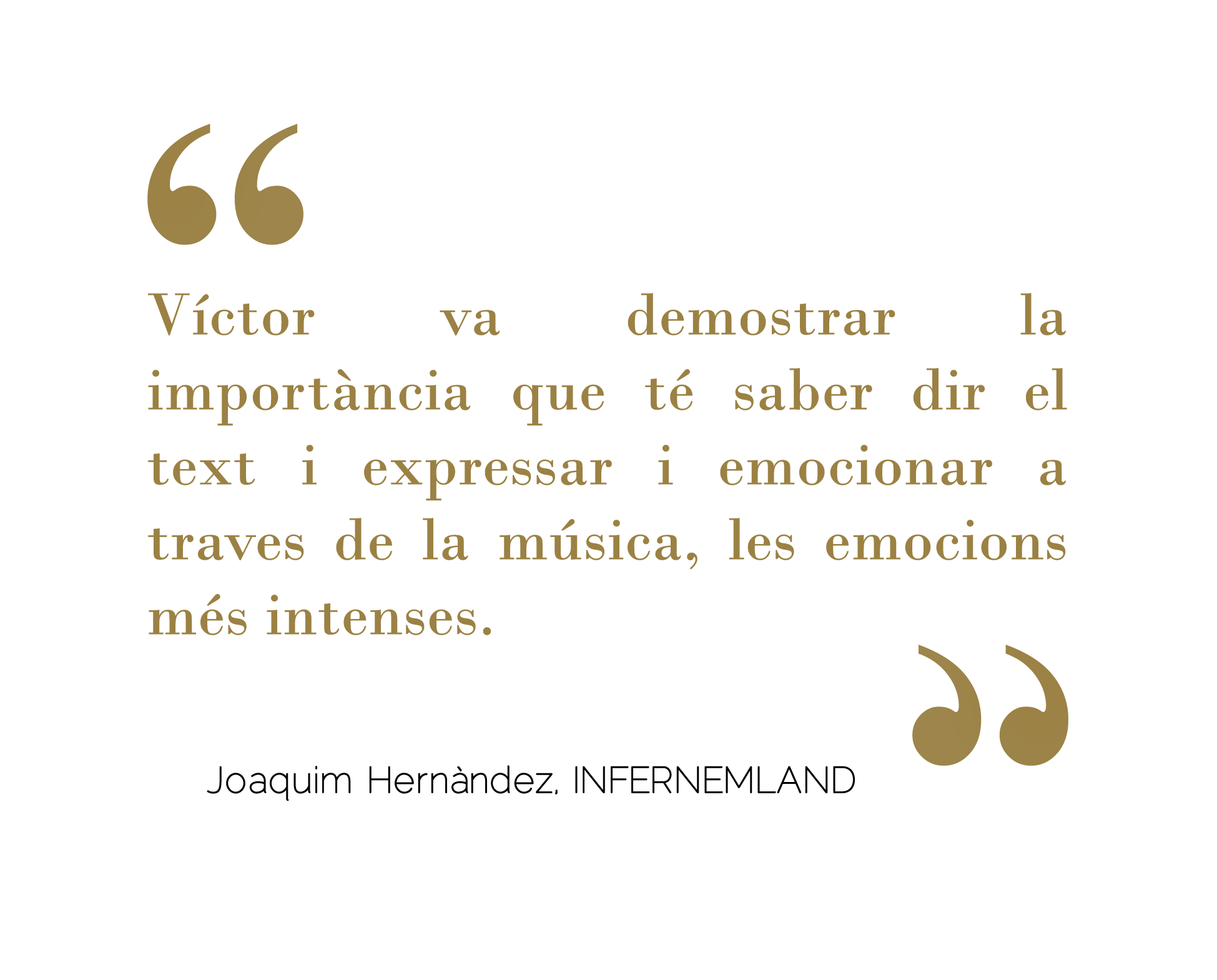 He arrives at the end of the year performing his own productions at Festivals such as Es Migjorn Gran's Ancient Music and the Maò Music Festival, with his A Thousand Ways with music by Purcell and Il Gesto Armonico and with Songs for Eliza, his Tribute to John Dowland with the laudist Maike Burgdorf at the Lyrique des Pays Catalans Festival. In October he is hired as a resident musician of the 8th Season of Residències Musicals of the Fundació Catalunya - La Pedrera in Barcelona, premiering with Nocturne his particular tribute to Mélodie Française with works by Ravel, Fauré, Debussy and Hahn next to the harpist José Antonio Domené. A program widely celebrated by critics where we have been reading affirmations like these of La Vanguardia: "with a remarkable interpretative maturity, the voice of Jiménez, of great timbral homogeneity, of incisive and metallic top, clear center and theatrical lows, added to a worked technical control, demonstrated good articulation, diction and control of regulators stunnishing the audience. "

In 2020, he opens the season as a prominent resident on La Pedrera and next to pianist Berta Brull premiered Musica Viva, an entirely contemporary composers from Barcelona program with Mariona Vila, Alberto Garcia-Demestres, Albert Guinovart, Miquel Ortega and Raquel Garcia-Tomàs, from who they offered the world premiere of My Old Gramophone, written specifically for the occasion and his voice. In his generous review, Alba Nogueras wrote "We are used to listening to countertenors in baroque, with a background harpsichord and historically informed sonorities, but after this concert, it is fully demonstrated that there is no period that can limit good musicians. Jiménez with a more than evident scenic domain, get the audience from the first moment, with a transparent expressiveness and without excuses he was presenting different interpretative registers throughout the concert, all passed through a personal filter, with a confident character and an unquestionable presence. With bright highs, resonant in the mask and with a very natural sound, nothing manufactured, standing all the pieces with elegance, having the composers in the front row. Undoubtedly, a challenge that he highly pass."

Víctor Jiménez Díaz, was born in Barcelona in 1988 and studied at the Conservatori Superior de Música del Liceu with Ingrid Ustrell, Sílvia Rovira, Anna M. Ollet and Josep Ruíz, and then with the mezzo-soprano Francesca Roig and the pianist David Mason. In addition, he received masterclasses from bass-baritone Carlos Chausson, countertenors Jordi Doménech and Carlos Mena, pianist and composer Miquel Ortega or soprano Motserrat Caballé, who wanted to guide his approach to the Belcanto's repertoire. He debuted in 2010 in small national productions until in 2012, participating in the 1st Week of Ancient Music in Ávila, he debuted in the Membra Jesu Nostri by Buxtehude under the direction of Daniel de la Puente, in the Auditorium of San Francisco. In this way he begins a specialization, the interpretation of historical music under philological criteria, which will mark the rest of his career. 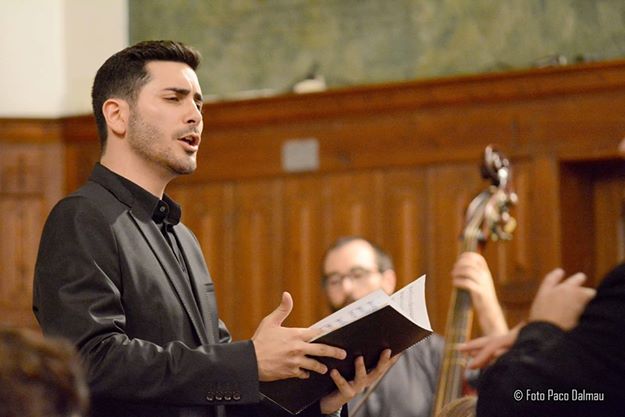 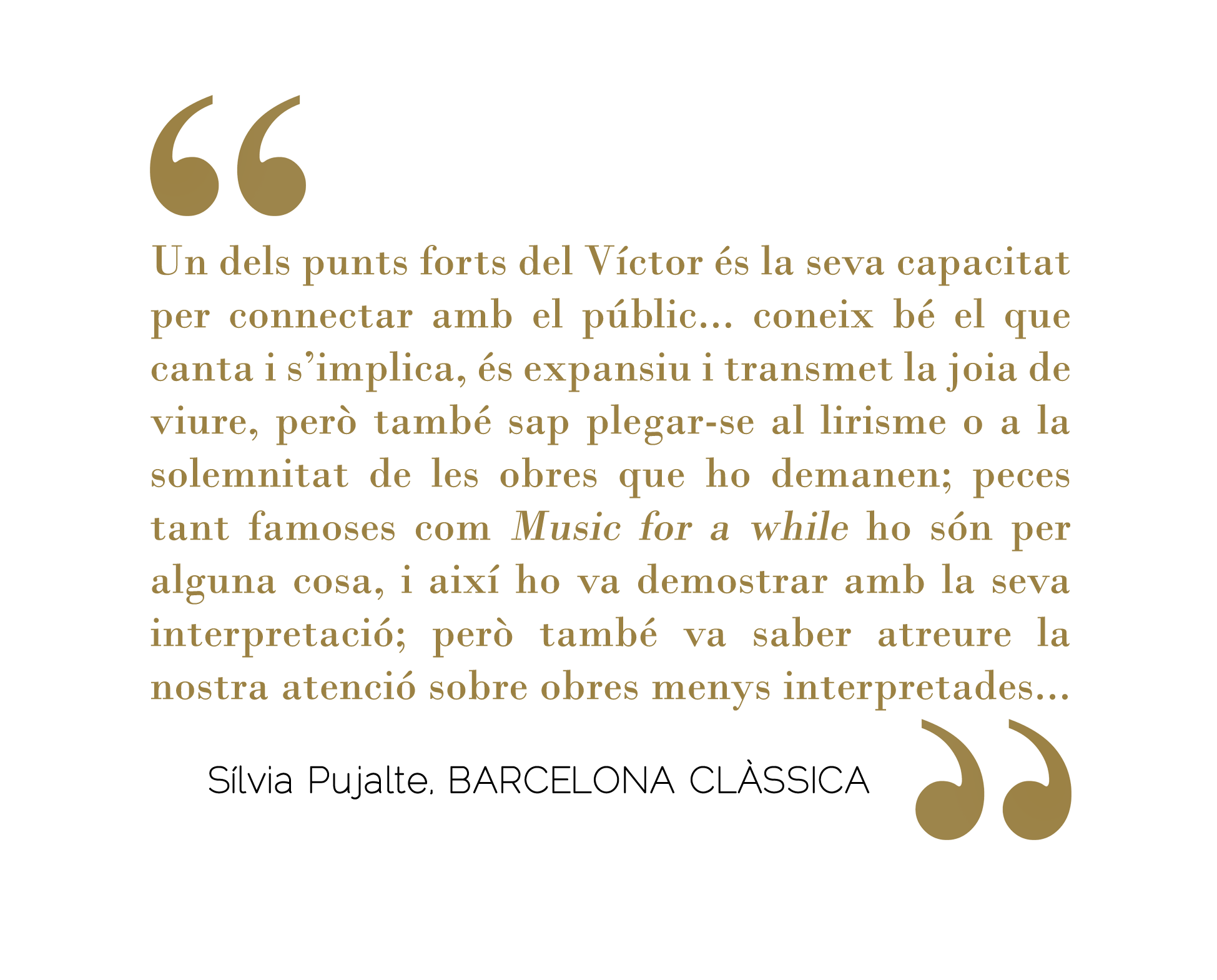